With over 17 million users around the world, Honey has established itself as a premier coupon browser extension. The browser extension created a name for itself on social media and surpassed competitors such as WikiBuy and RetailMeNot through influencer marketing efforts on a handful of different platforms. Some of Honey’s most notable marketing strategies include their sponsorship of the Barstool Podcast “Call Her Daddy” and their YouTube campaigns working with top influencers such as The Ace Family and MrBeast.

In 2012, Honey was founded in Los Angeles, California by entrepreneurs Ryan Hudson and George Ruan. The pair created the free browser extension and with just one click Honey automatically finds, tests, and applies the best coupon code at checkout. Honey has access to over 30,000 retailers including mega household brands like Amazon, Target, Nike, Walmart, and Apple.

The extension even has a rewards program named “Honey Gold” where members earn gold with each Honey purchase and later redeem their gold for gift cards to their favorite stores. Google Chrome, Firefox, Safari, Opera, and Edge support Honey as a browser extension.

Honey prides itself on ensuring no buyer’s remorse is felt after a purchase. In 2017, Honey saved members over 170 million dollars. Today, the browser extension saves members an average of $126 a year. That averages to be over 2 billion dollars saved a year with 17 million users around the world.  Fun Fact: In 2019, Honey became a subsidiary of PayPal. PayPal acquired Honey for $4 billion, the company’s largest acquisition in history.

From the 1,775 brands analyzed in Q3, the Tech industry was the reigning champ in spending. Leading brands in the industry spent over $68 million on influencer marketing, making up 35% of the total top industries’ spend. The industry surpassed a reach of a whopping 6 billion and also amassed over 458 million views and 27 million likes on its total 2,366 sponsored videos.

Collectively, the top 5 tech spenders attained 216M views, accounting for 57% of the total Tech industry views. Tech brands saw more than 2x the views and engagement, and in comparison to gaming an almost doubled IMV. Check out more of these metrics below on the Tech industry: 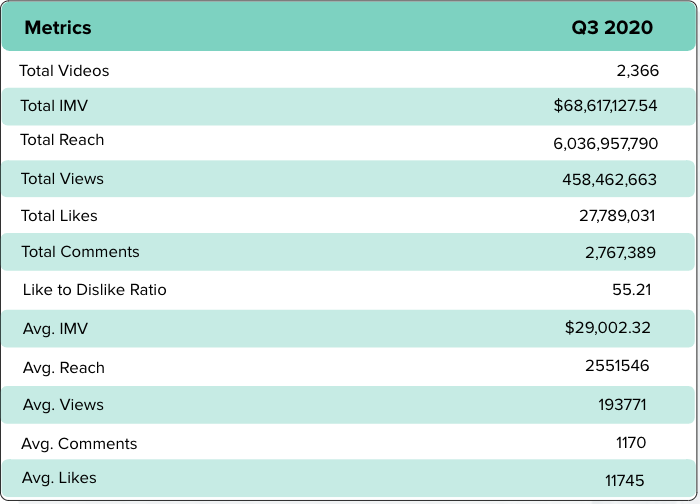 During Q3, Honey sponsored a total of 63 videos and worked with 56 influencers. Our Social Intelligence Report highlighted the top 10 most recognizable channels from sponsored videos on YouTube for Q3 and Honey was the only top spender to partner with a top 10 most notable influencer/channel. Honey worked with not just one, but three of the top ten influencers of Q3.

Honey’s universal, anyone can use it, so they promoted their browser extension by sponsoring entertainment, comedy, gaming, lifestyle and more. Each influencer was given their own “Join Honey” link for their viewers to join for free. The average Honey ad lasted just over a minute and most of the content was integrated into the influencers video, rather than starting or ending the video with the sponsorship.

Looking to run an epic influencer marketing campaign like this? NeoReach has the best experience in creating viral campaigns that convert on social media. Sign up here!

Honey worked with stellar influencers during Q3 and a handful of them produced standout content with the highest IMV, views, and reach. Their partnership with popular influencers guaranteed a hefty return on investment. The extension’s versatility also enabled influencers to integrate the browser extension seamlessly into their content. These five influencers were the top performing for Honey in Q3, check out their stats.

MrBeast joined YouTube in 2012 has grown into arguably one of the largest names on the platform. To date he has 52M subscribers! His content ranges from expensive ventures and philanthropy to challenges and original vlogging. MrBeast outperformed the second top performing influencer TheAceFamily by attaining 3x the number of views and more than doubling IMV, highlighting his influence and prestige. These numbers demonstrate Honey’s guaranteed return on investment by working with popular influencers on the platform.

Overall, Honey drew in $9,830,037.98 in IMV and 60,308,056 total views on YouTube. The top three performers MrBeast, TheAceFamily, and MichaelReeves, which were also a part of the top ten notable influencers in Q3, contributed greatly and brought in the highest views, IMV, and reach numbers.

As more and more individuals turn to online shopping, Honey’s presence will be more important than ever. With influencer marketing and sponsorships on trend to continue growing in upcoming years, Honey has endless opportunities to expand into different platforms, grow their membership base, and continue to surpass their competitors. Honey saves money, who wouldn’t want to use it?

This article was written by Lauren Conklin

Want to create a successful campaign like this? Get started with us today!

15 Funny TikTok Accounts That Are Sure to Make You Laugh

Upon Vine’s downfall, we were left without a means of comedic skits and humor from the world of social media. In 2019, things took a turn, as TikTok quickly became the new and improved Vine, where ...

From the potential TikTok ban to major platform shifts, 2020 proved monumental in social media history, yet 2021 is shaping up to be even more eventful. We previously wrote about Clash when they ...