While new streaming platforms like Twitch establish themselves in the digital gaming community, YouTube maintains its title as the top gaming site to host influencers and their branding initiatives. With YouTube, creators and various brands can use the platform for their growth-focused campaigns. NeoReach conducted Social Intelligence Insights Report for Q1 2020 to provide analyzed data from the US and Canada that was pulled from over 6,000 YouTube videos indicating brand partnership. Through this report, it was found that Epic Games came out on top as one of the top 5 gaming spenders, putting much of their marketing strategy into influencer marketing to promote their brand and games such as Fortnite and Totally Accurate Battle Simulator to the gaming demographic on YouTube.

Epic Games is an American video game and software developer/publisher based in North Carolina. Known for their games Fortnite, Gears of War, and the Unreal series, this gaming company has come on top as one of the most successful video game engines. As of 2018, the company has an estimated US $15 billion valuation. Knowing the growth and success of influencer marketing, Epic Games has dominated the space, even putting together programs that can benefit both creators and developers like their “support-a-creator” initiative.

This gaming brand took the cake for the highest brand spend at nearly $11M over 304 videos. To put it in perspective, the second-place top spender was Bang Energy, who spent $8M over 141 sponsored videos. These statistics show that Epic Games is dedicated to following industry trends with YouTube influencer marketing. 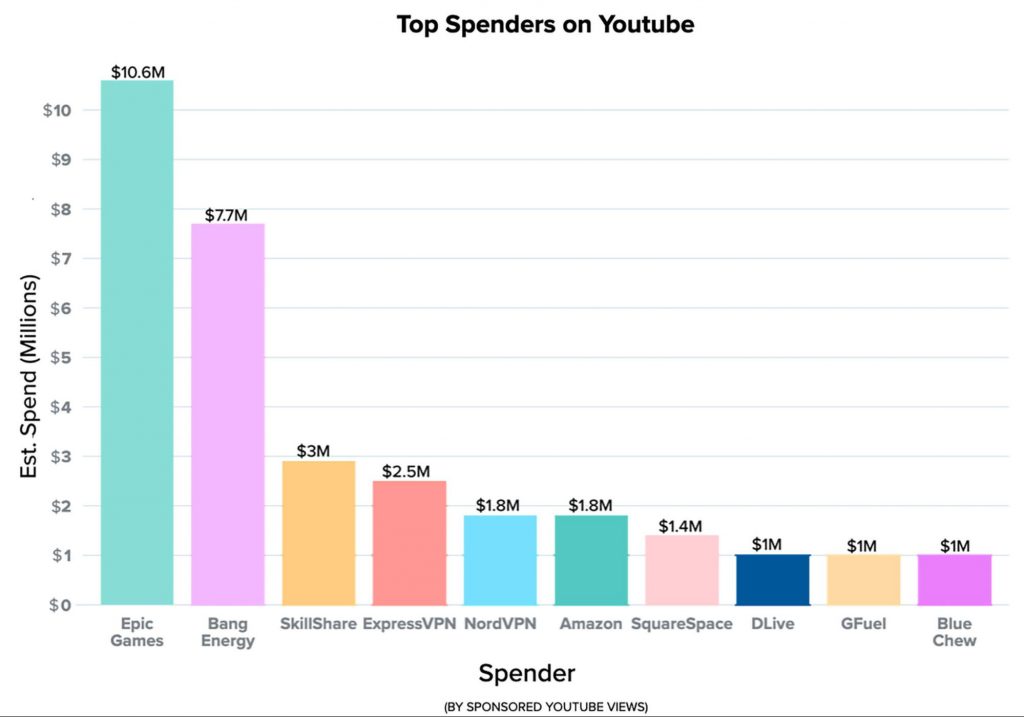 Reaching a total estimated spend of close to $14 million, the top 5 gaming spenders on YouTube for Q1 2020 achieved influencer marketing with a variety of strategies. With nearly 12 times greater spend on half as many sponsored videos, Epic Games locked in 11 times more views than Raid. As the largest YouTube spender in the gaming category for Q1 of 2020, Epic Games spent more than double the amount spent by all of the other four top spenders combined. Just shy of two dozen activated influencers, they achieved massive success with their chosen creators. 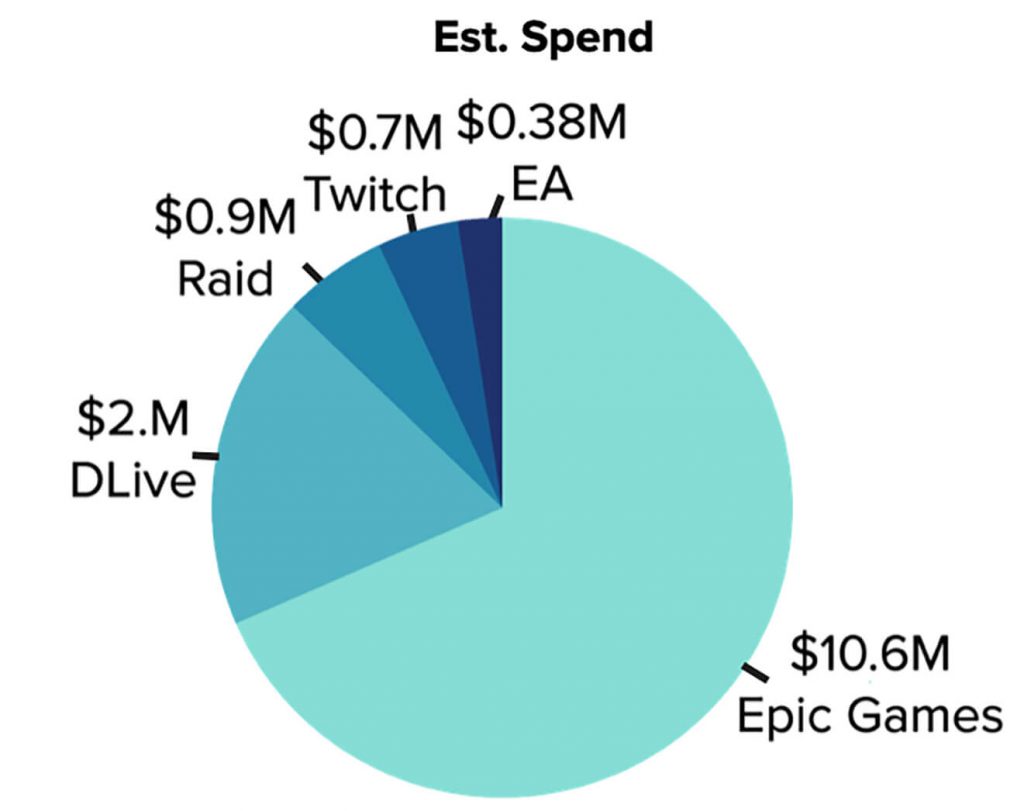 Going forward, Epic Games will continue to utilize influencer marketing and form strong relationships with gaming YouTubers. As a brand, Epic Games holds onto the strong belief that influencers are one of the main discovery engines for their games, allowing them to inspire millions of other people to play. In fact, the future of Fortnite continues to be driven by influencer input, as changes are made due to their constructive opinions.

In the report, gaming influencers came out as some of the top influencers. The top gaming influencers in their category were all activated for multiple videos each between two high-profile brands, with one of those brands being Epic Games. To promote their games, Epic Games recruited 23 YouTube creators to film themselves playing and providing tips for various games. To help break it down, check out this table that details the games each influencer promoted and the total number of videos they posted for the campaign.

Throughout the campaign, there were standout influencers that produced content with the highest amount of views, reach, and IMV. These videos were mainly geared towards the younger, male gaming community on YouTube (53% of Fortnite players are aged 10-25 ), and did their part in creating excitement around Fortnite and Epic Games. The content featured in the table below were all made between January 2020 and February 2020, mostly focusing on Fortnite.

Interested in who the influencer leaders for your industry are? Get started with our Social Intelligence software to find out!

You downloaded TikTok! You want to learn new dances, make silly and original videos, and of course… you want to go viral! By now, you’ve probably heard about the “For You” Page. The ...