Dude Perfect is five guys messing around, recording it, and uploading videos to YouTube. When you say it like that it doesn’t sound like anything groundbreaking but add in celebrity guest stars, world records, sports arenas, and epic trick shots and suddenly these five friends from college become one of the most widely known online entertainers of this generation. To find out just how notable these guys are, here’s a breakdown of multimillion-dollar Dude Perfect net worth.

What or Who is Dude Perfect?

Created by Tyler Toney, twins Coby and Cory Cotton, Cody Jones, and Garrett Hilbert, Dude Perfect has been an active entertainment group since they created their YouTube account in March 2009. Since then, the group has gained 51.7 million subscribers and 10.8 billion views on their channel.

NIGHT 2 of #TheQuarantineClassic is LIVE! 🥅 🏒 || Teams are set, competition is ready… let the Roller Chair Hockey action begin! COMMENT WHO WINS. LIVE NOW at the link in our bio!

Their most popular content, and a reigning factor in the Dude Perfect net worth, consists of videos showing their various impressive trick shots, stereotype videos, bottle flips, ping pong shots, and stunts. They also regularly upload “battle” videos where members of Dude Perfect compete against one another in sports-related games and contests.

With their success, they even filmed live battles called Quarantine Classic during the COVID-19 pandemic to satisfy sports fans in the wake of international sports cancellations and raise money for the Red Cross and Feeding America. Today, they’ve been named as one of YouTube’s top 10 most in-demand brands.

After the first video they ever posted on YouTube gained 200,000 views in the first week of being posted, Dude Perfect continued to gain more attention. After pledging to sponsor a child from Compassion International for every 100,000 views they received on their Sky Ranch video (which now has 20 million views), Dude Perfect was picked up to do a segment with ESPN’s E:60 and continued to appear on several ESPN’s shows.

Since then, the group has found more success in the entertainment industry, earning more professional endorsements and appearance requests on a consistent basis. This step has immensely increased the Dude Perfect net worth.

Their success doesn’t stop at their YouTube videos. The Dude Perfect net worth comes from the full brand they’ve built.

Dude Perfect has set multiple world records, including the following:

They have also been featured on multiple of YouTube’s “Top” lists, such as:

With a diversity of revenue streams, the Dude Perfect net worth breakdown looks at each of these individually to understand these influencers’ full potential.

With almost every one of their videos reaching 10 million views or higher, Dude Perfect has proven their success on YouTube. From having 20 million subscribers in 2017 to growing their audience to 51.7 million subscribers in 2020, it’s clear that Dude Perfect has grown in success and popularity as their channel continues to grow along with their partnerships and business ventures.

On average, they post 1 video per week that gains more than 7.5 million views within the first week it was posted. In a day, their channel can gain an average of 8 million views. On Social Blade, their estimated yearly earnings on YouTube are expected to reach up to $12 million.

In 2020, Dude Perfect partnered with YouTube Originals to release a documentary, Backstage Pass, which explored the creation and behind-the-scenes moments of their live tour: “Pound It, Noggin’”. This documentary came after their documentary made late last year, titled Untold Stories, which dealt with the backstories of their 10 most notable trick shots. Backstage Pass premiered on May 11, 2020, on Dude Perfect’s channel and has drawn in 11.4 million views, 441,000 likes, and 38,000 comments. 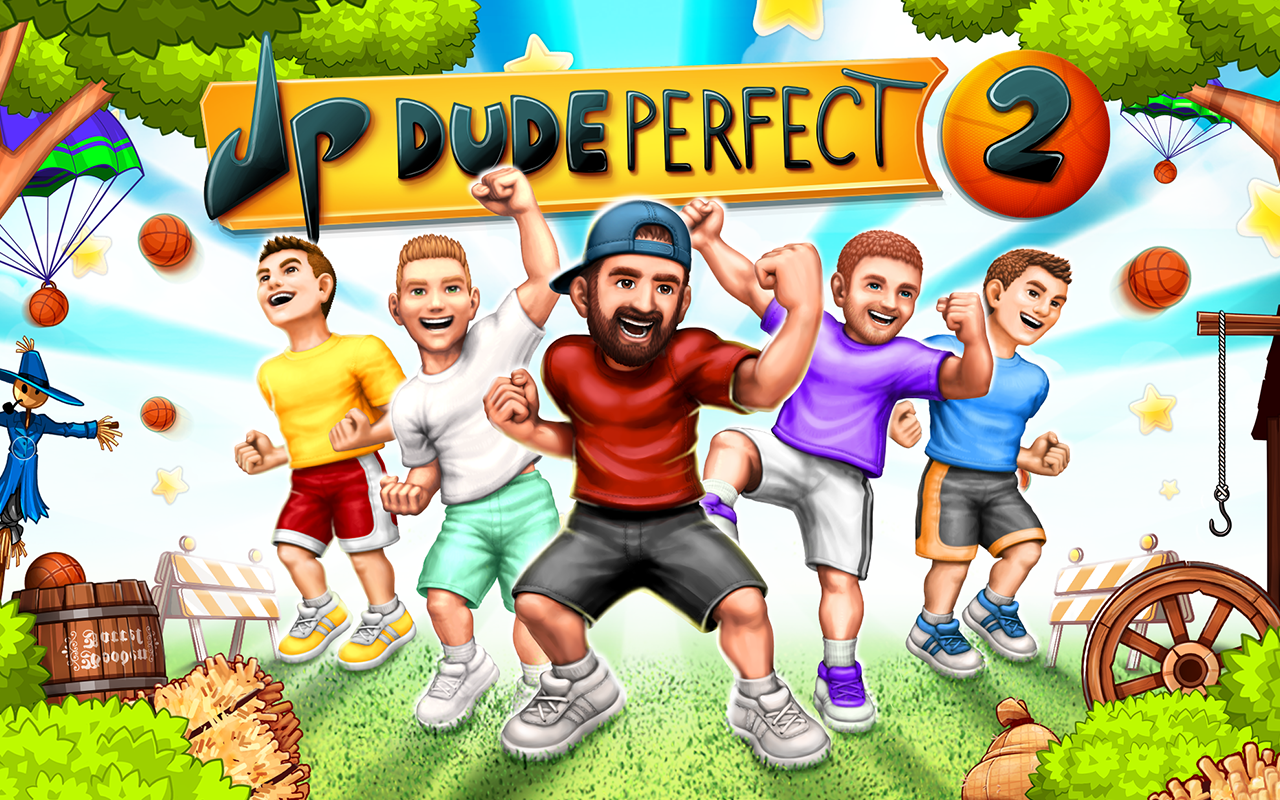 Both games are based on their YouTube channel and have players engage in epic trick shot challenges at various levels. It’s also important to note that Dude Perfect 2 is their most popular app, racking in more than 10 million installations on Google Play.

In 2016, their app, Endless Ducker, rose to the top of the iTunes store, becoming the #1 top paid app with more than 1 million installations. The game is an endless runner game hilariously based on Dude Perfect member Cody Jones who must always duck to avoid obstacles due to his height. Their app, That’s Lit also brings in an above-average rating of 3.8 on Google Play.

Overall, Dude Perfect’s mobile game downloads have reached up to 42.4 million according to their website.

By late 2015, Dude Perfect signed a contract with CMT to air their show, Dude Perfect Show. This resulted in the members moving into a Frisco warehouse that was built exclusively for filming their cable show and their online content.

According to Texas Monthly, the first episode of the show, which aired in April 2016, was one of CMT’s highest-rated original premieres, drawing in close to two million viewers. Its second season then moved to Nickelodeon, which allowed Dude Perfect to reach a younger demographic, playing more into their identity as a family-friendly channel.

They have also partnered with notable sports teams and athletic organizations such as the Dallas Stars, Dallas Cowboys, Houston Texans, Seattle Seahawks, NCAA, and the U.S. Olympic Team. Specifically, the group has filmed commercials, sponsored videos, and collaborated on products for these various brands. All of these deals are estimated to bring in millions of dollars in revenue for the group.

After their live tour in 2019 that drew in huge crowds, Dude Perfect has decided to tour again. In 2021, the 5 members will be embarking on the Dude Perfect 2021 Tour, performing in multiple arenas. According to their schedule, they’ll perform 25 shows and travel to 20 different cities and locations across the U.S. and Canada.

BREAKING NEWS ALERT! We officially have new dates for the Dude Perfect 2020 Tour! Out of an abundance of caution, we’ve proactively re-scheduled the tour to 2021. All current tickets will automatically transfer over and be honored for the new dates. If you’re a ticket holder and cannot make the new show, you will receive an email directly allowing you to request a refund. For more details or if you have any questions, please contact the box office at your local venue or email support @premierproductions.com. Thanks for your understanding and we can’t WAIT to see you next summer! #PoundItNoggin

They’re featuring VIP packages that offer post-show fan press conferences and meet and greets, pre-show meet-and-greets, as well as premium seat/early entry packages. With tickets priced up to $500, the revenue from this tour is expected to be high, as seats have been in high demand and close to selling out.

On their store, Dude Perfect currently sells t-shirts, hats, hoodies, socks, backpacks, joggers, and basketballs that all feature their name and logo. Their prices range anywhere from $16 to $75, and they also feature Gift Cards up to $200 on their site. According to Celebs Fortune, it is estimated that they can make up to $500,000 from merch sales per year.

This shirt and summer vacation are the best things coming your way! 😎 Enjoy summer to the fullest in our awesome new June Design! Order a 1, 3 or 12 month subscription by Friday May 31st at midnight EST and this shirt will be delivered straight to your door by the end of June. That means you’ll have our epic new All-American design just in time for 4th of July. Celebrate in style this year with Dude Perfect! 🇺🇸

In 2011, Cory Cotton authored Go Big: Make Your Shot Count in the Connected World, in which he discusses how Dude Perfect came together and all of the secrets that Dude Perfect has learned along the way as they build an online empire in a social media-influenced world.

Thank you Houston! Austin tonight, then 2 shows in Dallas for the big finish!

In the book, Cotton shares how the “dudes” went from shooting trick shots in their backyard to starring in GMC truck commercials in a short period of time. By unveiling his five practical principles for taking your dreams and passions to the next level, Cotton tells his readers how they can reach millions in a “connected world” by optimizing their skills.

Besides his book, Cotton also has become a speaker, appearing on several different television shows like CBS’ The Early Show, and speaking at the Catalyst Conference, one of the world’s largest leadership events.

In 2019, Dude Perfect became the #2 highest-paid YouTube Stars, making $20 million, which was a $6 million increase from their earnings in 2017. According to Celebrity Net Worth, their net worth is estimated to be $30 million.

Check out their social media channels below:

Capture a range of audiences with influencers like Dude Perfect. Get started with us today!

Facebook has been instrumental in paving the way for social media marketing for years. The large reach on both Facebook and their acquired platform, Instagram, has been a primary tool for brands ...

Let me ask you a question. Do you ever turn on the radio and instantly recognize the song that’s playing? Chances are, that song’s big on TikTok! In an age of virality and streaming, it’s no ...